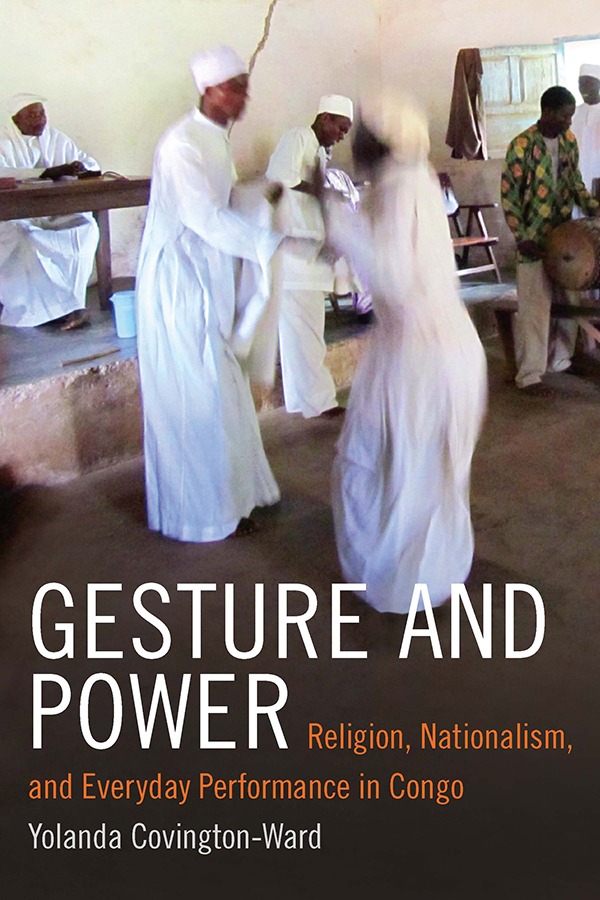 Gesture and Power: Religion, Nationalism, and Everyday Performance in Congo

ABOUT THIS BOOK
In Gesture and Power Yolanda Covington-Ward examines the everyday embodied practices and performances of the BisiKongo people of the Lower Congo to show how their gestures, dances, and spirituality are critical in mobilizing social and political action. Conceiving of the body as the center of analysis, a catalyst for social action, and as a conduit for the social construction of reality, Covington-Ward focuses on specific flash points in the last ninety years of Congo's troubled history, when embodied performance was used to stake political claims, foster dissent, and enforce power. In the 1920s Simon Kimbangu started a Christian prophetic movement based on spirit-induced trembling, which swept through the Lower Congo, subverting Belgian colonial authority. Following independence, dictator Mobutu Sese Seko required citizens to dance and sing nationalist songs daily as a means of maintaining political control. More recently, embodied performance has again stoked reform, as nationalist groups such as Bundu dia Kongo advocate for a return to precolonial religious practices and non-Western gestures such as traditional greetings. In exploring these embodied expressions of Congolese agency, Covington-Ward provides a framework for understanding how embodied practices transmit social values, identities, and cultural history throughout Africa and the diaspora.
AUTHOR BIOGRAPHY
Yolanda Covington-Ward is Assistant Professor of Africana Studies at the University of Pittsburgh.