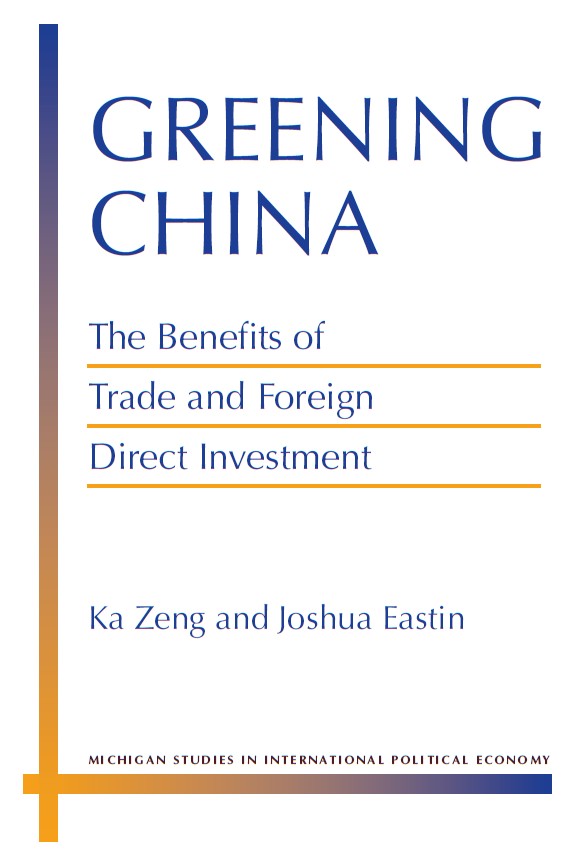 Greening China: The Benefits of Trade and Foreign Direct Investment

by Ka Zeng and Joshua Eastin

“The authors make some very critical interventions in this debate and scholars engaged in the environmental ‘pollution haven’ and ‘race to the bottom’ debates will need to take the arguments made here seriously, re-evaluating their own preferred theories to respond to the insightful theorizing and empirically rigorous testing that Zeng and Eastin present in the book.”
—Ronald Mitchell, University of Oregon

China has earned a reputation for lax environmental standards that allegedly attract corporations more interested in profit than in moral responsibility and, consequently, further negate incentives to raise environmental standards. Surprisingly, Ka Zeng and Joshua Eastin find that international economic integration with nation-states that have stringent environmental regulations facilitates the diffusion of corporate environmental norms and standards to Chinese provinces. At the same time, concerns about “green” tariffs imposed by importing countries encourage Chinese export-oriented firms to ratchet up their own environmental standards. The authors present systematic quantitative and qualitative analyses and data that not only demonstrate the ways in which external market pressure influences domestic environmental policy but also lend credence to arguments for the ameliorative effect of trade and foreign direct investment on the global environment.
AUTHOR BIOGRAPHY

Ka Zeng is Associate Professor of Political Science and Director of Asian Studies at the University of Arkansas.

Joshua Eastin is a scholar of international political economy and environmental security, with a focus on Asia.